So I wanted to take a brief moment to highlight and thank Marlona Sky for continuing to update his view of New Eden, the Coalition Sov Map. Here's the latest version, dated 7 March: 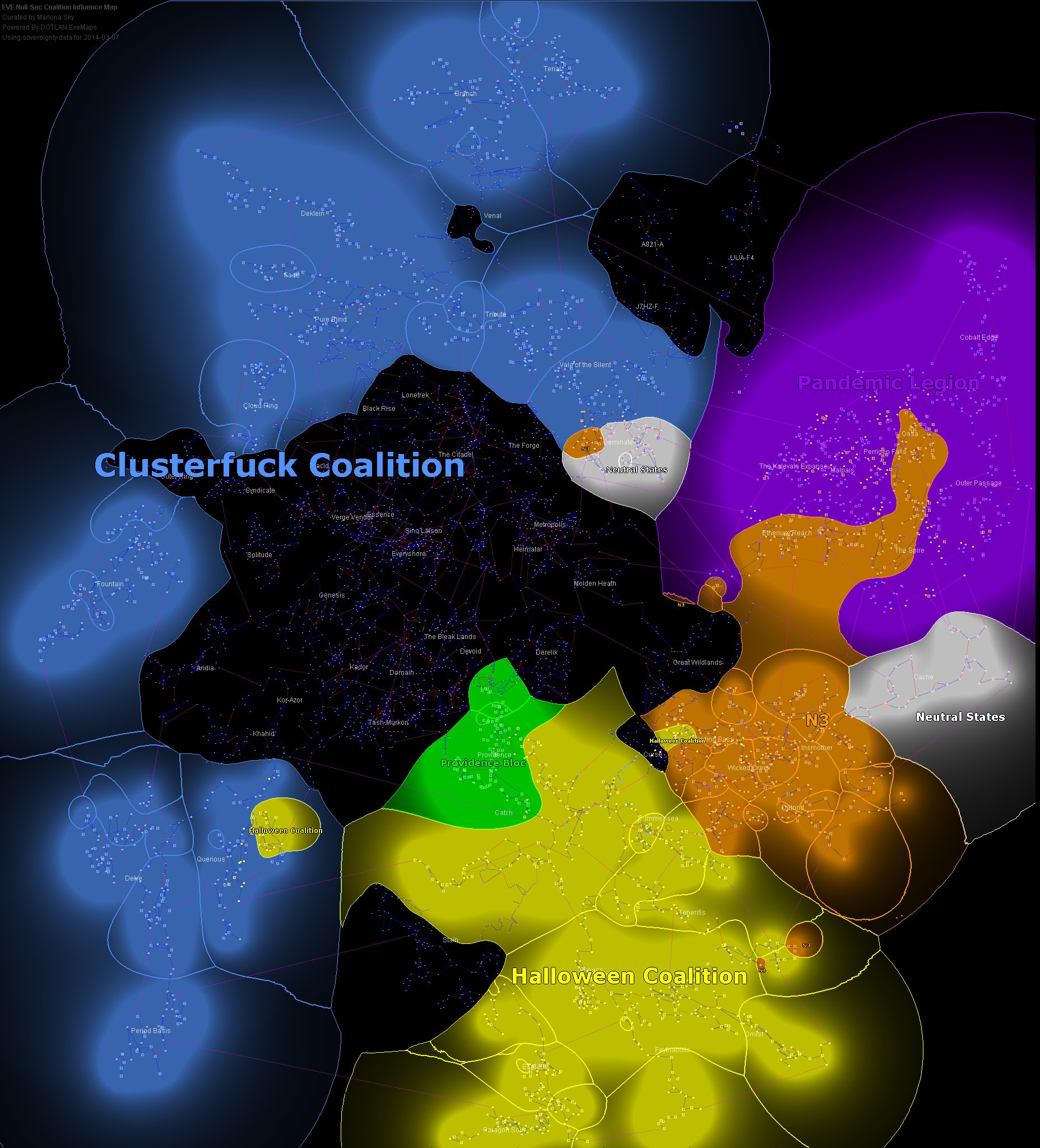 As you can see, he's either taken my advice about showing N3 and PL separately for a while or independently come to the same conclusion I did that they should be. Either way, it's a good idea and the map looks great. Go to the highly useful "Battle Reports" section of PL's kill board and you'll find that PL has been staying out of the south during February for the most part, confining themselves to low-sec plus a few jaunts into Curse and Providence. I commented after B-R that we wouldn't be seeing PL and N3 "acting in concert any time soon."

The entertaining bit for me (right up until today, more on that in a second) was that the map and its data was doing a great job of shoring up a conclusion I came to some weeks ago: that the southern Russians (whether you call them the Halloween Coalition, RUSRUS, or some variation on StainWagon) were not showing the will to finish off N3 even when the latter had been driven to their knees by the CFC. As a matter of fact, the opposite was proving to be true: it looked like N3 was trying to launch a counter-offensive and it seems fairly clear they either paid or otherwise induced the new HERO coalition to hit the Russians in the back.

And that was gonna be the post: just pointing at the map, telling you all where you could find it, thanking Marlona for making it, and occasionally pointing out that N3 didn't want to go on the cart, they felt happy, and they thought they'd go for a walk.

And then in the past couple of days, things seem to have suddenly become interesting. Suddenly, progodlegend is reporting large numbers of PL ships in "N3/PL" fleets, the PL Battle Reports are confirming it... and Darkness of Despair was disbanded today, throwing 77 systems in six regions (Impass, Immensea, Catch, Feythabolis, Esoteria, and Tenerifis) open to anyone who has the will to take them! EVE News 24 has the full story. Needless to say, N3 swooped in and started capturing stations, apparently taking station systems in all six regions tonight and anchoring TCUs right through the heart of southern Russian space. In particular, the route straight into southern Russian renter space lies open.

Is a month "soon?" I'm gonna have to think about that one.

Anyway, needless to say we're gonna need a new Coalition Sov Map. Marlona's working on it. ;-) Once again, thanks for doing it, Marlona!

You know, if you listen really close you can almost hear the sound of teeth grinding on the west side of the map tonight...
Posted by Jester at 11:44 PM