I've been seeing a bit of whining here and there about how resource-gathering is "hard" in ESO so I thought it'd be interesting to write a quick guide on it. This is by no means meant to be definitive but should get brand new players over the hump of "This is what you should look for." at least.

First rule of resource-gathering in ESO is get off the freakin' road! See that part of the map that's well away from all the in-game markers, the part that has the impassable-looking terrain on it, the part that seems the furthest away from anything at all? Go there.

Third rule of resource-gathering in ESO is to use your eyes! Look around the terrain around you. Those people on horseback riding around the countryside at breakneck speed are not gonna see a thing and wouldn't notice a big pile of gold if they rode right past it (and they often do!). Stay on your feet, stay mobile, move your eyes back and forth sweeping the terrain around you. It doesn't much matter if you use first-person or third-person view, though I find the third-person view useful.

Getting off the road gets you away from your main competition for resources: other players. Going to the edges of the map and going high up makes it more likely that you're going to see the goodies others won't or find hidden pockets in the terrain to hoard. And keeping your eyes open will help you spot these things. But once you're doing the right things, here's what you're looking for: 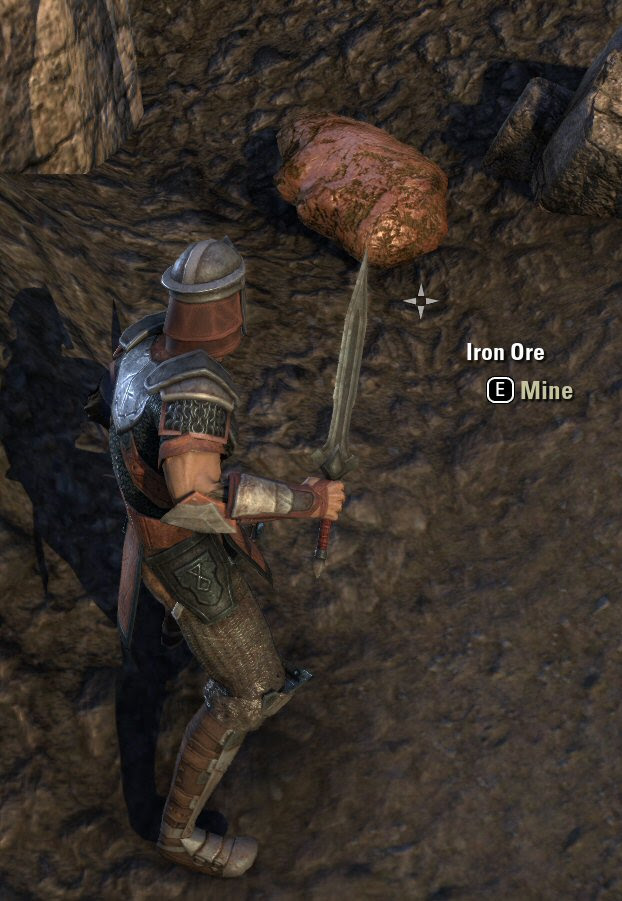 This is iron ore. It's used to make heavy armor and most melee weapons. You'll pick up 3-4 units of ore for each of these you find. Iron ore is often tucked up against the sides of mountains, particularly the sides of mountains on coastlines. In some areas you can quickly run across three or four of these in a line tucked up against some distant mountain facing the coastline. 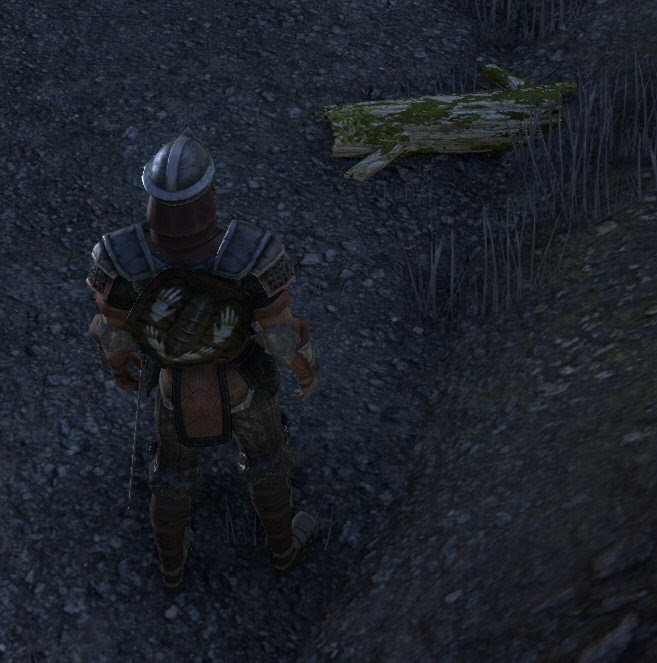 This is wood. It's used to make bows, staffs, and shields. It tends to be in the same sorts of places you find iron ore, though big clumps of trees will often have at least one of these nearby if you hunt around a bit. These are the easiest to spot if you get high up and sweep your gaze around the nearby countryside. 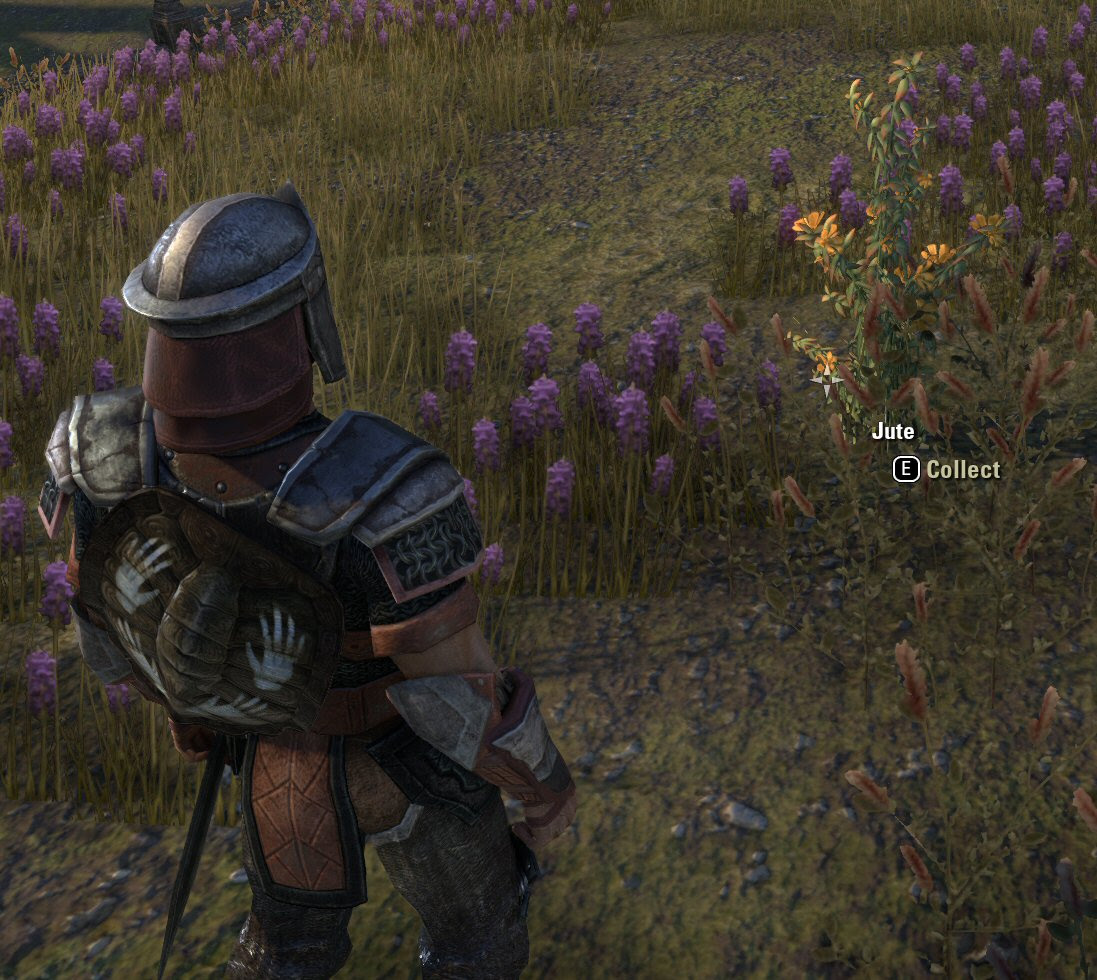 This is jute. It's used to make light armor. Conversely to wood, it tends to be the trickiest to find, often tucked in among other plant life (as it is here) or in the shadows of hillsides. I've also frequently found it on the outside edges of the towns that you visit. Not shown is the various hides used to make medium armor. You'll find these on the mid-level creatures inhabiting each area you visit: mudcrabs, wolves, ketches, bears, et cetera. 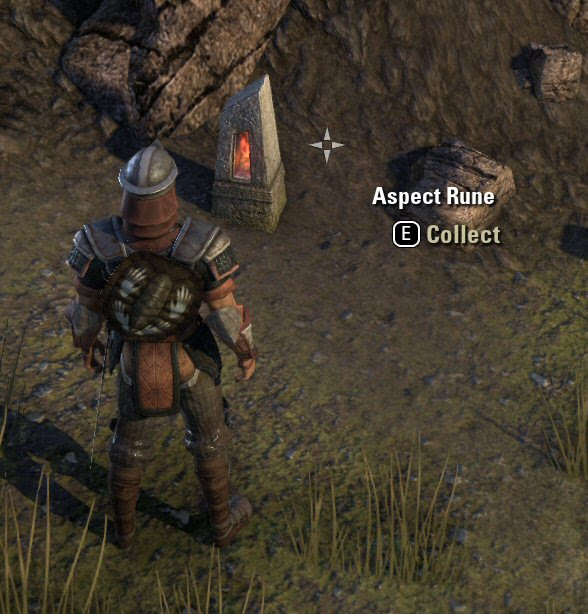 This is a rune. There are three types. These are taken to Enchanting Tables in the crafting areas of the game and are combined -- one circle rune, one square rune, and one pentagon rune -- into glyphs. Once you have a glyph, you right click a weapon or armor or whatever to apply the glyph to it. Be wary of enchanting your bread-and-butter weapon since magical weapons eat through their energy stockpile and must be recharged with soul gems. 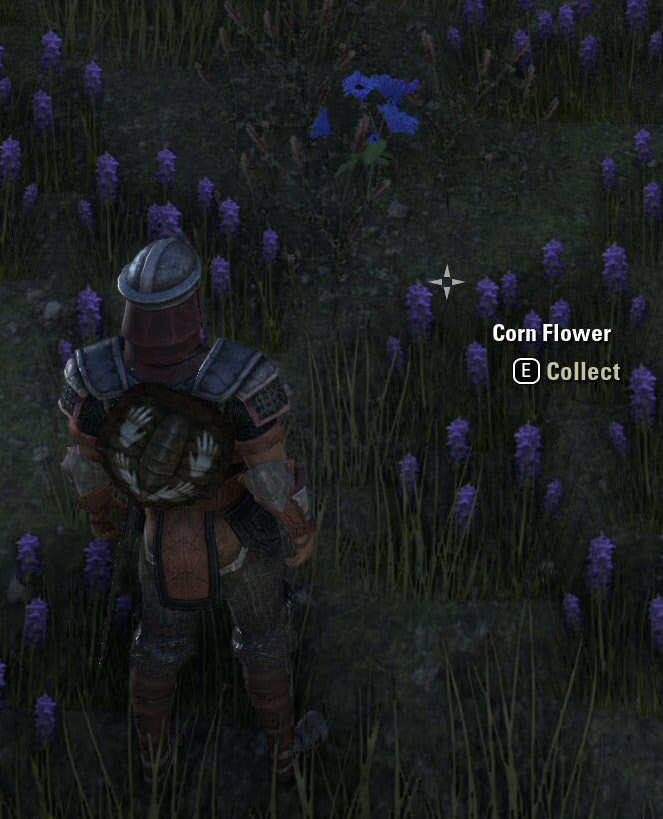 This is a reagent, used to make potions. There are dozens of types. As you wander the wilderness, look for plants that look slightly out of place compared to their surroundings. Note these blue flowers in the sea of purple. That's your clue that this plant is harvestable. I'm still learning about potion creation but it appears to follow the Skyrim model. 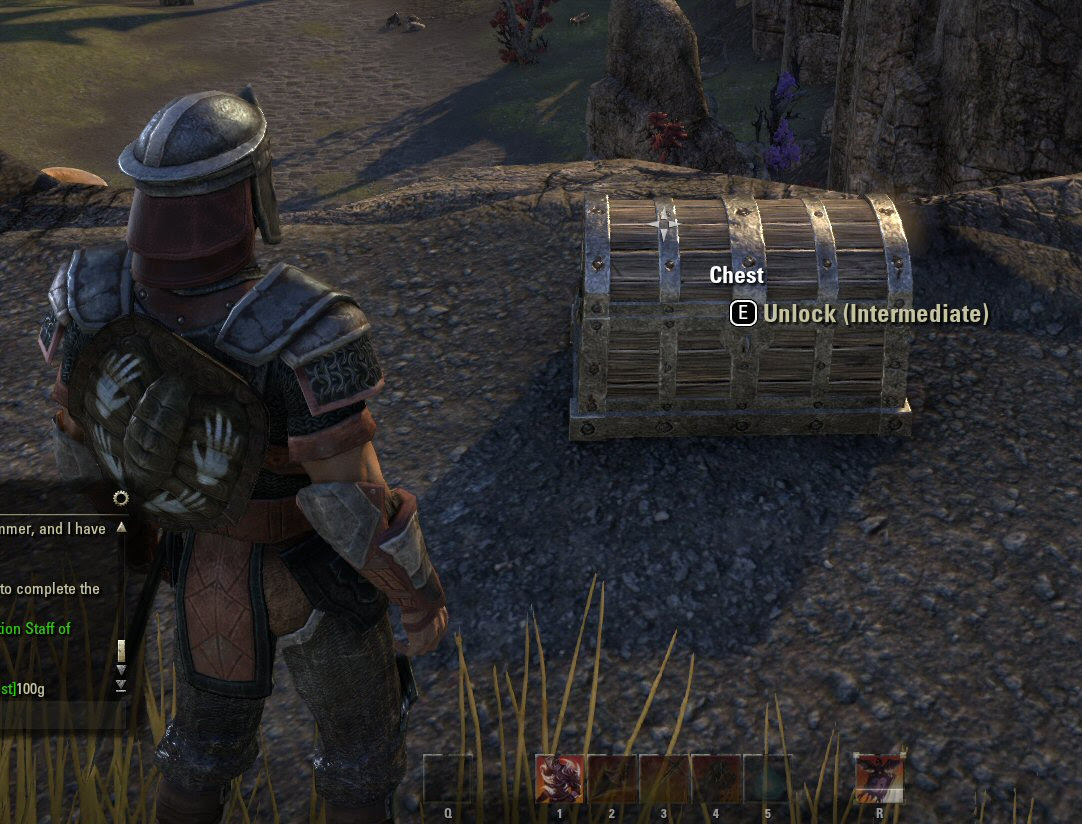 This is a chest. It's the most rare type of resource that can be gathered. They'll be locked, and will use the ESO lock-picking mini-game to open. Chests are nearly always tucked away in remote corners of the map, behind notches along mountain walls, on remote beaches far from other players, or under bridges or other terrain features. Note this one placed on a cliff overlooking a road on which there were a lot of people completely oblivious to its presence. Chests always have a good stock of gold, a potion of some sort, and some sort of magical goody in them. They're almost never guarded.

Finally, when you "win" a particular area and there are a lot of NPCs standing around cheering you, it will be tempting to go straight to the next area. Don't! That's what all the other morons are doing. All those resources that are usually on the map are still there in this "victory instance." Take ten or fifteen minutes and roam around looking for them. If your backpack isn't completely full of goodies before you enter the next area, you're doing something wrong.

Other than chests, resources take only seconds to gather and once they're gathered, they disappear for other players for a goodly long stretch. So if you see one, pounce on it!