All in all, day five of the second New Eden Open wasn't bad, exactly, but it was far and away my least favorite day of NEO2 so far. First though, an quick errata. Last week, I said that 12000 people were watching; the true audience was about 4000. I mistook the number of twitch subscribers CCP has for the number of those actively watching the NEO2 stream. I apologize for the error.

Things opened this morning with what I described as the four weaker teams proving why they're the weaker teams. About As Good As a German Ski Lesson took on Semicolon Drop Table Users and while the latter team technically won, they didn't exactly cover themselves in glory. Semicolon struggled to beat a really sub-par Ski Lesson comp, something that didn't bode well for their success later in the day. About 2000 people were on-hand to see them win 45 to 44.

Then it was ISN Incursion Shiny Network versus Dyslexodus We Be May. While not as bad as the first fight, it was still pretty poor. Exodus struggled with execution with their triple Domi comp. In particular their Keres pilot showed some really poor flying, boundary violating while being out-damped by an enemy Maulus. Surely, if you're damped -- even if by a frigate -- you'd want to come a little closer rather than trying to out-range your opponent? ISN meanwhile did show excellent use of massed rep drones. But at the same time, their Vexor pilots strayed needlessly right into the heavy neut range of three Domis. Whoops! This battle was won by ISN, who flew less poorly than Exodus did.

That brought Semicolon up against an actual top-tier team, Kolbasz Inside. And they were completely outplayed in every possible way: in the bans, in the ship selection, in execution and in individual piloting. The Hungarians crushed Semicolon losing no ships at all. Semicolon -- using a triple Hyperion comp -- didn't even bring skinned Hyperions to make things interesting. That was quite a missed opportunity! ;-) By this time the audience was up to 2500.

Next up basically saw a repeat: a lower-tier team in ISN taking on a top-tier team, THINGY. ISN brought basically the same comp they'd used to fight Exodus. That is something you simply cannot do on finals weekend, particularly against a strong team like THINGY. The latter brought a really fun double Claymore Curse setup and absolutely destroyed the incursioners in a flawless victory. CCP capped off a really terrific ISN run... by playing an ad for The Valhalla Project, something I have to say made me literally laugh out loud. gg, CCP, gg.

Anyway, that ended the hopes of all four lower-tier teams in the first 90 minutes. Congrats to About As Good As a German Ski Lesson, Semicolon Drop Table Users, ISN Incursion Shiny Network, and Dyslexodus We Be May for making it to finals weekend! You all had fine runs. But go get more practice! Once the final matches started, the audience got up to 3000 people and stayed there the remainder of the day. 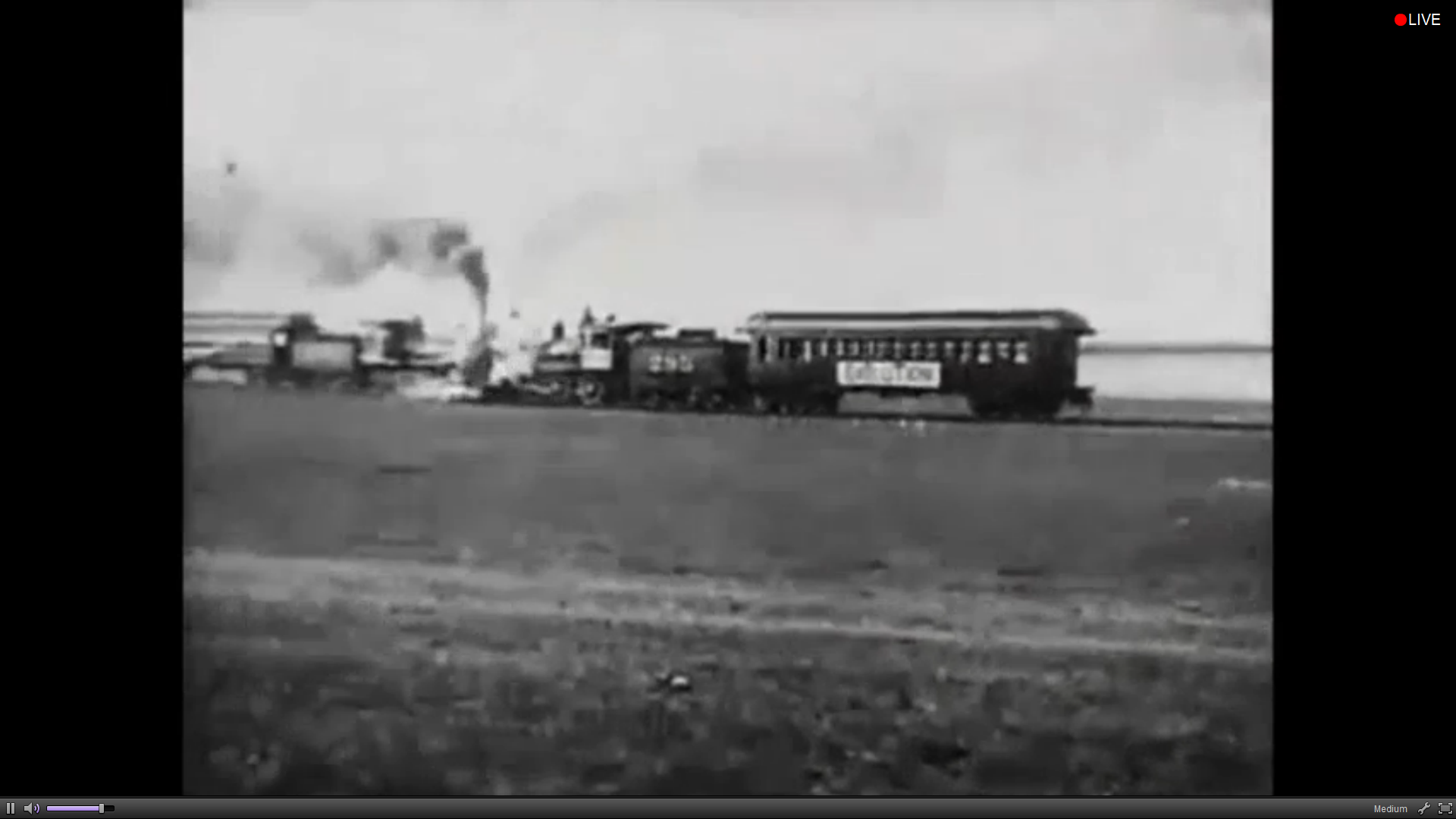 After the break, that brought up the first match between two top-tier teams, WeHURT versus Warlords of the Deep. And again, the match was woefully one-sided. WeHURT, which is really not a poor team, looked completely out-matched and incompetent against the crushingly tough Warlords team. Using more or less the same double Claymore Curse setup that THINGY used to shove ISN out of the tournament, they wiped out an otherwise acceptable double Fleet Typhoon, double Harpy, Claymore comp from WeHURT. The latter team, despite having a strong weight in their support wing of frigates never actually applied that strength against the Warlords bomber wing, to their sorrow.

WeHURT's second attempt went even more poorly than their first. They also brought the same comp twice in a row with predictable results, getting absolutely face-rolled in a flawless victory by a Warlords double Claymore triple Sabre comp. This one was over the moment WeHURT lost their first ship. That prompted the show of sorrow from CCP Bro that I mentioned in my last post. He stuttered and struggled to find words, which he hasn't done to this point in the NEO2.

Intermixed with these two matches were two fights between Kolbasz and THINGY that were equally one-sided. In the first match, we watched a pretty standard triple Sleipnir double Caracal comp from Kolbasz lose to a double Eos triple Vexor comp from THINGY. The latter team brought both massive neuts and massive damps, which the Hungarians were simply not prepared for. They ended up having to turn their DPS against the THINGY drones. Meanwhile, THINGY executed perfectly, isolating each of the Kolbasz ships and wiping them out one by one with no ship losses. 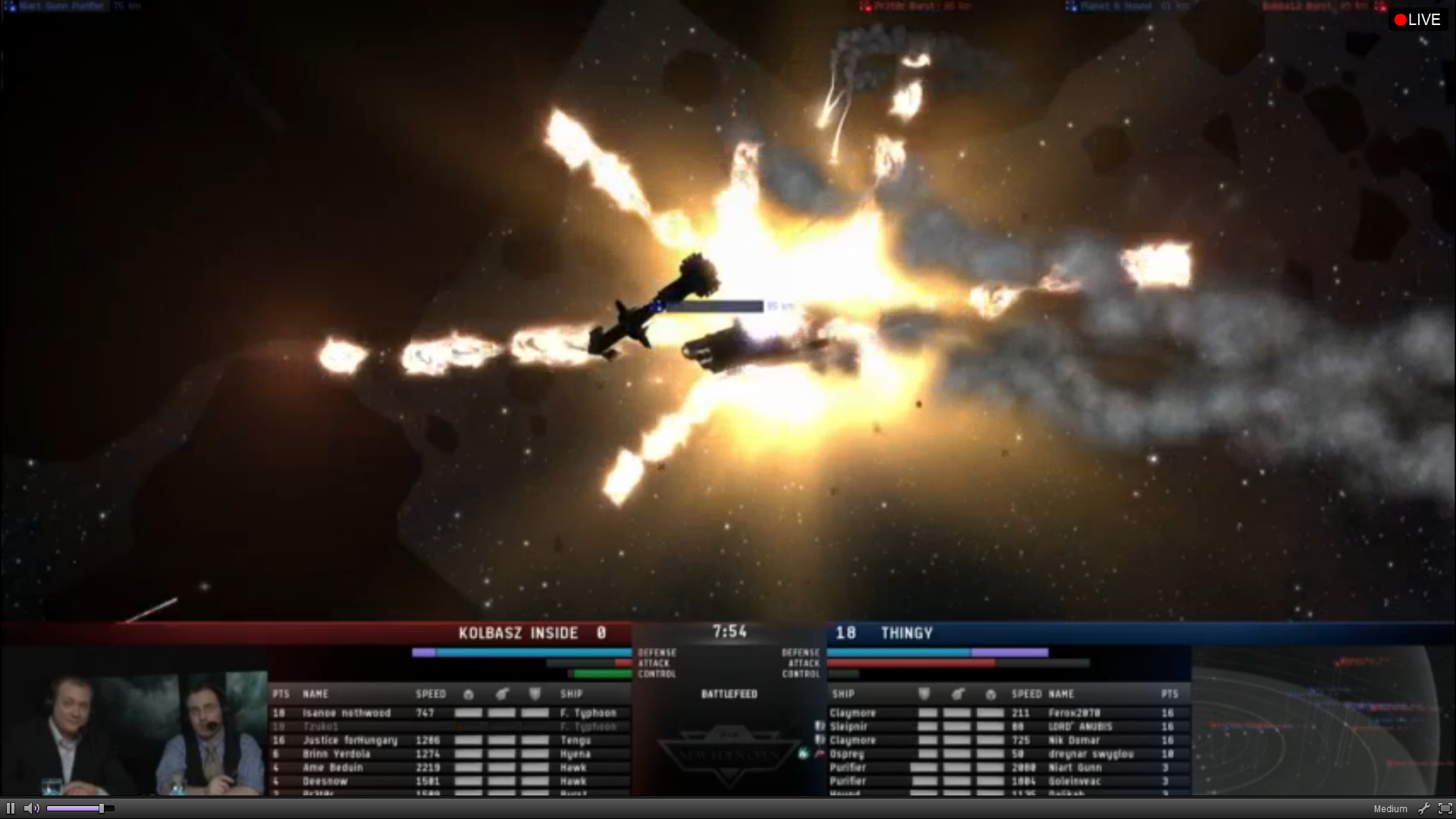 The second match was again even worse: Kolbasz brought out a double Fleet Typhone double Hawk comp. THINGY meanwhile showed off a vicious double Claymore Sleipnir quadruple bomber comp (two Hounds, two Purifiers)! CCP Fozzie spent some time describing this comp as overpowered for the points and it showed. The THINGY "attack" bar was as huge as I've ever seen and for most of the fight, most of it was bright red as torps and HAMs just laid the Hungarians to waste. That loss pushed them out of the tournament with fourth place, or as I sometimes like to say it, "first place loser." The cost of bombers is gonna have to be increased for AT12.

So all in all, a lot of really one-sided matches. We go into tomorrow with three teams left, all three guaranteed large cash and PLEX prizes: WeHURT, THINGY, and Warlords of the Deep. Expect Warlords to win handily, and I expect THINGY will come in second place. With THINGY being the Hydra sparring partners this time, that caused me to quip:


Hm, practice partners in an #eveonline tourney final? Someone remind me how that went last time. ;-) #neoii

Still, WeHURT might pull a rabbit out of their collective hat, so I'll be watching come morning...
Posted by Jester at 11:09 PM