OK! So there was what I consider a big announcement today that I'd like to talk about some. ;-)

Needless to say, I'm thrilled at the prospect of custom ship skins, custom colors, corp and alliance logos, all of it. This has been something I've been strongly in favor of going back almost to the beginning of this blog. And what's more, various EVE devs have been hinting at the possibility of doing this going back that far, too. It's one of those things that gets spun up from time to time and players right across EVE are usually overwhelmingly in favor of it. I certainly am! And this time, it looks like it might actually happen.

I don't even mind too much if micro-transactions are involved. ;-)

So needless to say, when this has come up in discussions with CCP devs, I've been unwavering in my support for putting dev time into this. Lack of individuality and customization has always been a weakness of EVE and I think a lot of the devs realize it. The issue is that making this kind of change is going to be freakin' enormous. Done well... done correctly, this will be the kind of graphical update that will put the Trinity patch in 2007 to shame in terms of scope. We're not even done with V3 graphics here and CCP has to seriously consider going straight to V4. That's what they're facing.

So it's not at all surprising that they're stepping into this cautiously. Thus, the "pilot" ship painting program. This thing has "baby steps" written all over it. It's relatively easy to implement: a good bit of artist time, certainly, but in terms of development time not as ambitious. A few new BPCs, a few new items in the NeX store, a few new ship TypeIDs, some tweaks to ship recognition here and there. As I said, it's baby steps.

And it's from these baby steps that CCP is going to decide whether to commit itself to a larger effort. The comment thread is already well-launched, dozens and dozens of posts, and lots and lots of them are already clamoring for "rig-style" ship painting. I've asked for this myself: a ship base color plus two or three accent colors, plus a place to put a corp or alliance logo.

It's a big job. I don't think any of us including myself can appreciate how big a job it is. 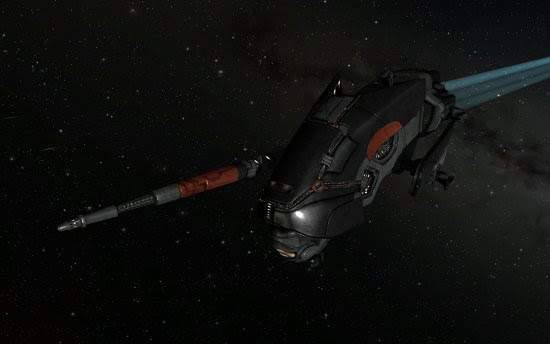 CCP is going to decide whether to do this big job based on nine ships, a slightly controversial price point, and a model that... well, it hasn't worked very well so far. After all, you can buy a Catalyst with a gorgeous paint job for +14 million ISK over the base model. I look at Jita and I see a few dozen such Catalysts sold per week. Meanwhile, the plain old green Catalyst sells in vast numbers -- hundreds per day -- and is probably built by players for their own use or for the use of their corps or friends in numbers nearly as great. So yeah, there's a hill to climb here.

I'm here to encourage you to help CCP climb it! This is something that should be done. This is worth spending developer time on.

It isn't hard to read between the lines on this one. CCP is going to be watching this one closely:


If there is no demand, then it would be quite difficult to justify dev time spent on such a project though. This is one of the reasons why we have this pilot project in place.

So here's the thing: even if you're not particularly in favor of this first step, if you are in favor of the destination, do what you can to support this pilot! I for one made the argument that if players don't necessarily go for the five color schemes that are going to be piloted, it should not be automatically taken as a failure for the concept. But I'm not sure how much that message got through.

Painting a frigate? During the pilot, that will cost +8 million ISK. Painting a battleship? +62 million ISK. I've argued for lower prices. I want custom paint jobs everywhere. I want it to be just as automatic and just as common as rigging ships and done nearly as casually. I want these things exploding by the hundreds... just like all those Catalysts. ;-)

This is a pilot program. CCP will decide if it's successful or not based on player participation in both the pilot and the comment thread. Please jump into there and make your voice heard!
Posted by Jester at 7:53 PM