It's way too early for another look at the output of my little program that tracks logged-in player counts. After all I only did an update on that data two months ago. I generally do these sorts of posts two or three times a year and wasn't planning my next one until the run-up to the summer expansion, whenever that is.

But I happened to spot this article on Wikipedia the other day and I was charmed by it -- an EVE Online battle, in an encyclopedia? Neville Smit let me know the other day that EVE University is seeing a big spike of new players, the guys in Brave Newbies that talk to me are telling me the same, and of course there was this data that CCP Manifest was nice enough to share with me about new player account creation and trial account conversion. And then on top of that, we've got the upcoming EVE player monument and the snapshot that was taken of subscribed players a week ago, March 1. Everyone who had an active account on March 1 is on the monument.

And so that sent me to the player count data a little early.

The algorithm that I use to look at this data has always been a little wonky. The math I use to generate the daily average is set up such that it will show me what I think of as "micro-spikes": small enough jumps in the logged-in player counts so that I can see major events happening in EVE. I originally tweaked the math this way for the Incursion expansion so I could see the impact of the big live events that CCP ran at that time. This way of running the math makes the graphs "twitchy" and tends to overemphasize minor changes. It makes those minor changes easier to see, and since minor changes have been all we've had to talk about for the last few years, that hasn't bothered me too much. But I've also consoled myself with the thought that if "something real" happened to the number of logged-in EVE players -- something major -- then the data coming out of my little tool would still definitely show it. 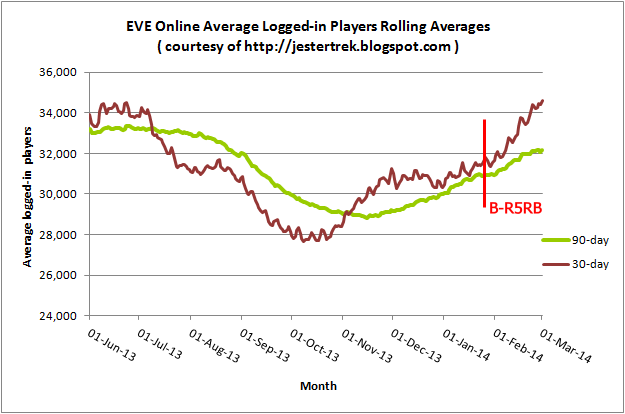 I'd say something real is happening, wouldn't you? ;-)

Remember, that red trend line is the rolling 30-day average. So it takes 30 days for an event in New Eden to fully manifest itself on this graph. B-RB was on January 27-28, 39 days ago. The bottom of the curve was at the start of the Halloween War last year. I've marked the date of B-R5RB for reference. You can see what the numbers have been doing since then! The spike after Rubicon was faster: that expansion pushed the 30-day logged-in player average up 6000 logged-in players in seven weeks. But this one is showing signs of having some staying power!

Keep your fingers crossed!
Posted by Jester at 10:13 PM