Things are pretty quiet around here and that just reflects that things are pretty quiet in New Eden right now. Other than BNI and their new allies deploying to Sendaya on the Curse border, there isn't a lot to talk about. Only about a third of the articles on TMC's front page are EVE-related at all and about half the articles on the front page of EN24 as I write this are CSM candidate interviews or opinion pieces. So I'm not the only one feeling the pinch.

This has, however, given me some time to get fairly philosophical. In particular, the topic of gamer entitlement has been on my mind lately.

Let's play a hypothetical little game. A new space-related MMO is coming out. The graphics are quite pretty, but it's very content thin, very wonky, and somewhat buggy. The developers want you to both buy the client software and then pay a monthly subscription as well. There are about 40 ships available but not that many players, only about 20000 or so. The tutorial is horrid, the manual is worse, and the skill system makes no sense. For these and other reasons, the reviews haven't been that good: it's averaging 6 out of 10.

Do you buy the game? Or do you skip it? Perhaps you even bad-mouth it?

Well, you've probably guessed by now -- or maybe you haven't -- but I'm describing the first release of EVE Online: The Second Genesis in May 2003. Here's a review from that time. This review is actually pretty good, compared to a lot of them. PC Gamer gave the first release of EVE a 5.5 out of 10. Put into context, that's about the same score they gave Aliens: Colonial Marines last year. Yeah, ouch.


Now of course if I described a game in those terms today -- pretty but empty, buggy, and thin -- I'd be describing, oh, about 70% of the MMOs that have come out in the last few years. The road has been littered with their corpses. Gamers as a rule are becoming more and more demanding of what they expect from a title at launch. Short version, a brand new launch MMO apparently has to have hundreds of thousands of programmer-hours put into it before day one. If this hasn't been done, chances are damn good it won't be given a chance. This is taking "you don't get a second chance to make a first impression" to a pretty dire extreme.

For EVE, a large number of the things you probably think about when you think about EVE were not in that first release: actual workable missions and agents, a working market, war-decs, POSes and sov, player-owned stations, capital ships, T2 ships... all of these came later. Even a semi-decent tutorial wasn't added to the game for two years. In that first version of the game, you could mine, you could build ships, and you could blow up other players with them. And that really was just about it. 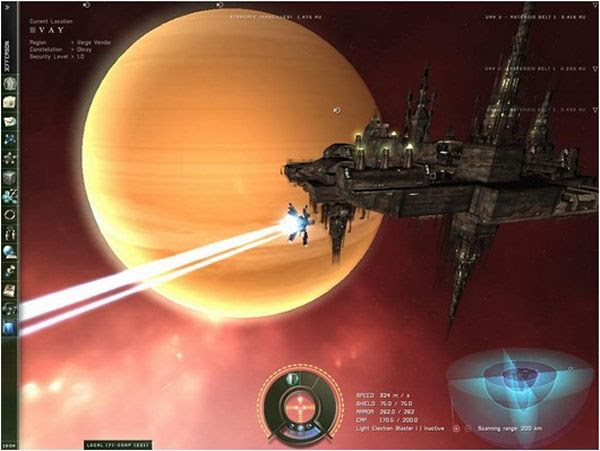 If EVE: The Second Genesis were released in 2014 (with graphics updated to today's standards), it would fail... almost immediately. It would be laughed right off the market in the first year. It would be lucky to last as long as Black Prophecy lasted. If it were lucky. Instead, EVE did succeed. But it took time... lots of time to repair bugs, add content, actually build walls around the sandbox, make the game at least possible for normal humans to understand. A compelling argument could be made that it took EVE four years to put together a functional game, build an audience, and break out of its early woes.

Games aren't given time to develop over time, mature, grow a player base, find an audience any more. We don't give the developers time to develop their vision, conquer the launch bugs, and start to actually grow their games. If it's not right, right from launch, gamers are absolutely brutal.

I wonder why that is. When did we become so impatient? With the exception of World of Warcraft which was (maybe ironically?) very well reviewed out of the gate, many of the successful MMOs out there had really bad, poorly-reviewed starts. But more and more often, these poorly-reviewed starts are followed by the announcement that the game is going into limited development or closing outright.

This begs an interesting question: what's it going to take to launch a successful MMO in 2014? Are any of the games being released this year going to get anything like the amount of time EVE got to prove itself?
Posted by Jester at 11:58 PM