So, needless to say, I've been quite busy in Elder Scrolls Online since its launch yesterday. Let's get the easy bits out of the way first:
I've been involved in the ESO beta for several months now and had the beta client installed (as did, I think, a lot of launch day players). And there was nothing special needed to do for launch day except update the client the day before the five day pre-trial I was entitled to. The client version number passed 1.0 (it's on 1.0.0.962841 as I type this) and that was that. I received my collector's edition copy with four discs but haven't had to install it.

That's not to say the game is bug-free. I've run into several minor ones and one pretty major one: player groups refuse to enter the same instance together under some conditions that I've had trouble reproducing. Still, my overall impression of the game remains quite favorable. I still stand by my position that the more you play this thing like another MMO, the less you're likely to enjoy it. But if you play with the peculiar desire to see what's over the next hill of a true Elder Scrolls fan like myself, you'll find whole stretches of true greatness. Say hello to Molag Bal, the villain of the piece, by the way. That's a struggling human he's got in one hand and a large maul in the other. The thing curling back behind him to the left is a spiked tail. This statue becomes important for reasons I'll talk about later today or tomorrow.

Anyway, I've played the game about 30 or 40 hours over the last six days and there's no question in my mind that the developers have captured the spirit of the past three ES titles. Because of the Daedric focus of a lot of the goings-on, it owes the most to TES4: Oblivion. But there's quite a lot of TES5: Skyrim (particularly in skills and crafting) and TES3: Morrowind as well. There have been so many little moments that I've gotten a smile out of that I can't even tell you, but I'll mention three just to give the feeling of the thing:
Short version: the devs have played Elder Scrolls games. More than that: the devs get Elder Scrolls games. Bravo!

Seriously, the more you just rush from quest to quest, the less impressed you're going to be by this game. Instead, play it leisurely. Wander! Go out just looking for stuff. Hell, just go out looking. Even the little minor stuff is cool. I came around another corner to find a cave cut into the rock where someone had apparently attempted a daedra summoning... and apparently it had gone badly. All the evidence was there, but it was equally clear that there was nothing to be done since it had happened a decade or more prior. It was just something cool to look at. The game is just chock full of these tiny little easter eggs for those who want to see them.

OK. Let's do some things I'm less of a fan of. The game uses the fairly standard-for-MMO multi-character "bank" thing. This doesn't work in an ES game. At all. It particularly doesn't work in the rather slipshod method it's been implemented. Guild Wars 2 got this so much more right with multiple "banking" areas spread across a large building. In ESO, you really have to hunt to find the banks and they're tiny little buildings with only one "banker". This creates enormous crowds of overlapping players trying to get this business done that you have to push through to interact with the banker.

You nearly immediately feel the loss of not having a house. ES games have centered so much on players having their own houses to come back to that not having it here feels really wrong. You have a backpack that you can buy more slots for and you have the bank which you can also buy more slots for. And that's pretty much it. The crafting system is wonky enough that if you want to get into crafting as I did, you'll soon rapidly fill all of those slots and be constantly struggling with what to sell and what to keep. While that's also admittedly a very characteristic thing from ES games, it's not something that should have been replicated.

I don't care if the game says your "house" is in large inns in the major cities with instanced rooms. But individual characters should have a place where they can store some of the dozens and dozens and dozens of crafting materials without having to worry too much about inventory slots. That's sort of an ES tradition, after all... I'll talk about the crafting system as a separate post. 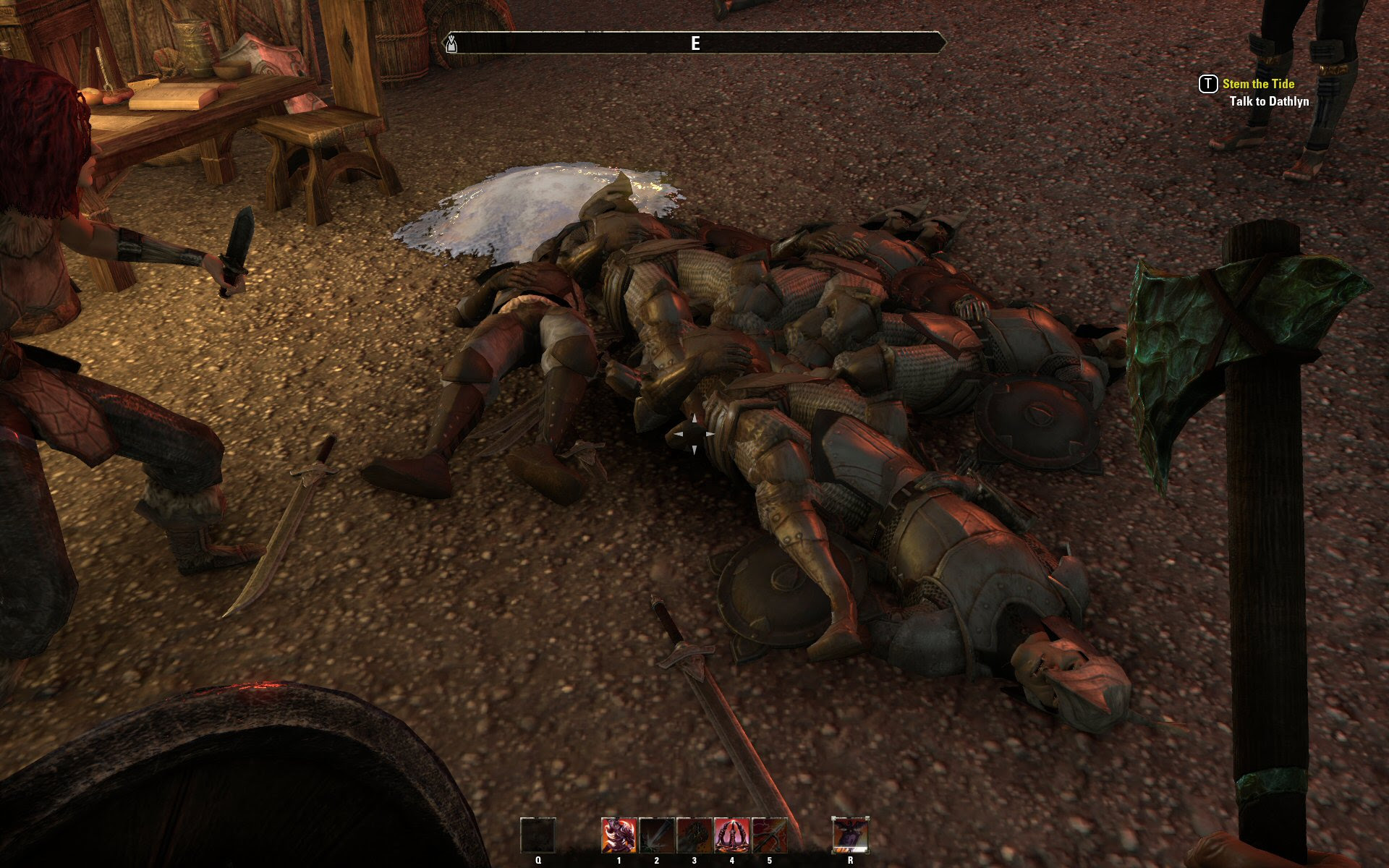 If you do do the quests (and sooner or later, you'll do some to work up your loot and your gold), you'll find that several of them suffer from the standard MMO foibles that should have been avoided. Here's the final boss of one of the quests -- killed over and over with eight or nine of his "bodies" piling up. This one had a flock of characters camping it waiting for him to re-spawn because he drops pretty good loot.

The game borrows heavily from other games here and there. The intro, main quest, and dodge mechanic is lifted straight from Kingdoms of Amalur. The main threat to the game world is lifted from Rift -- they even look similar. Lots of the mechanics here and there are lifted from Guild Wars 2. I'm sure there are other lifts and homages that are from games that I'm not familiar with.

All that said, these are relatively minor quirks which are annoying, but aren't interfering with the main fun I'm having playing this game. And that fun simply comes down to rolling over the next hill and seeing what's there... and often finding something that makes me smile or laugh and nearly always results in a good time. Westward ho!