With all of my Fanfest posts out of the way and a few content posts that I wanted to talk about posted, I also want to get caught up with the results of Burn Jita. Tracking those results has become a bit of a tradition around here, so let's see how the Goons did, shall we? 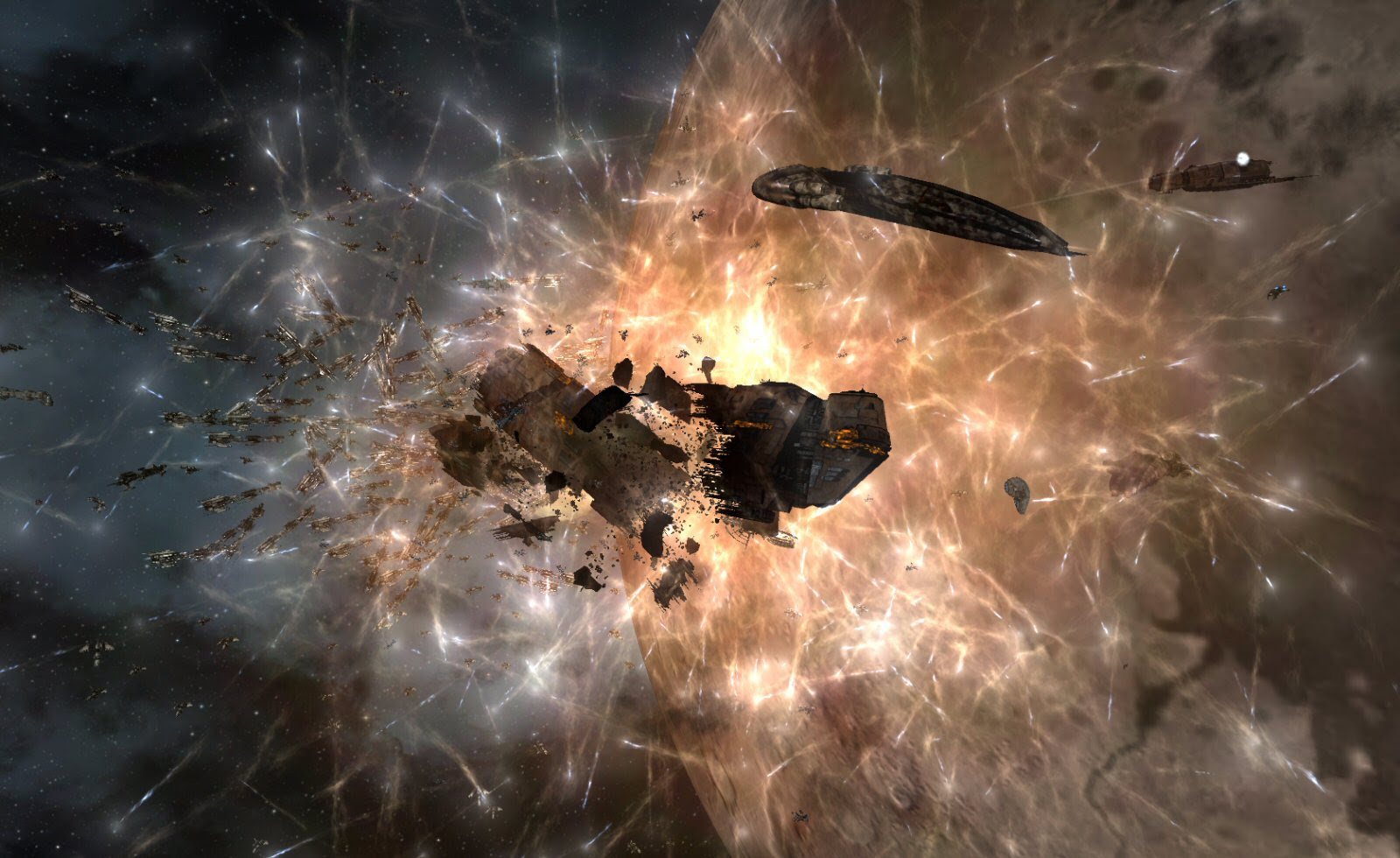 The festivities kicked off at 1144 EVE time on Friday, 25 April and as usual, Jita was the focus for the first several kills. But word seems to have spread much quicker this year than last. Only eight freighters died in the initial rush and by 1700, hunting had moved to the surrounding systems. The first day saw 20 freighter and JF kills, compared to 16 in year one and 27 in year two. Things proceeded much more satisfactorily for the Goons on Saturday, with 25 or so kills before DT. But things again slowed down during EUTZ culminating in 54 kills for the day on Saturday... again less than last year. Probably for lack of targets, the carnage turned to Orcas, resulting in several good kills which I won't (for consistency's sake) include in my tally.

Sunday before DT livened things up with a bit of a hat trick: all four types of jump freighters killed in quick succession: an Anshar in Perimeter at 0249, an Ark and a Rhea in Jita at 0404 and 0429, and a Nomad in Perimeter at 0456. Again, about 25 ships were killed before DT, and again things slowed down for the EUTZ. By Sunday afternoon USTZ, Goons were begging in Local for freighters to undock stating that they were leaving. The day ended with 47 kills (compared to 52 last year).

Then things got slightly ticklish. Last year, Burn Jita wrapped up by DT or so (Sunday night USTZ) and through the rest of the "day" Monday there were few or no freighter kills. That technically resulted in 16 kills on "Monday" last year, the vast bulk of which actually happened Sunday night USTZ. This year, the freighter-ganking continued well into Monday EUTZ, and the final gank wasn't conducted until 2008 in Jita, a Charon. This inflated the score slightly, with 33 kills on the "final" day. As this event grows older, I think we can expect it to extend farther and farther into the following week. There were a few here and there that muttered darkly that the Goons, dissatisfied with their "score", were extending things until the hit the target that they wanted to.

A cynical man might say that target was "more kills than last year." Op success.

As noted above, the one area where the culling was an unqualified success was in jump freighter kills, with 16 total, four more than last year and the year before:

Finally, I have included in the tally four freighter that were ganked for either genius or wonton stupidity, you decide. Each decided to try their luck at profiting from Burn Jita by scooping the wrecks of other destroyed freighters. By doing so, each either knowingly or unknowingly declared themselves suspect and were open prey for all. Perhaps they figured with the gank ships getting blapped off the field, they could get away successfully. Perhaps they were counting on scoop-and-dock. Whatever they were counting on it didn't work. A few might have succeeded at this tactic, but that four did not. Better luck next year!

On that topic and unlike last year and in keeping with my recent decision to try not to publicize people dying stupidly, I'm going to skip publicizing individual loss mails. If you died, you (hopefully) know what you did wrong and why it was wrong. If you insist on looking into the carnage, the amusingly-named site isjitaburning.com includes a ship by ship tally of losses, values, and pilots. If it's numerical analysis you want, Gevlon Goblin has done some but be warned his post has an almost unnatural amount of "grr Goons" mixed in with the graphs and links.

Overall, I believe the Goons can count the event as a success. The very fact that 150 freighters died in an event that was publicized in advance and then kept dying despite jumping into systems with dozens of "flashies" in local speaks to the obliviousness of the typical freighter pilot. That said, it must be noted that this year's event was much less publicized -- and warned about! -- than last year. Last year, CCP included in-client warnings of the event and word spread much more widely and well while the event was going on. This year, if CCP issued one of their "traffic advisories", I missed it. As I noted a few days ago, the current EVE Launcher lacks the capability to display "emergency" messages during log-in.

So, as I said, a successful event for the Goons and ample reason to continue the tradition next year!
Posted by Jester at 11:43 PM