Bonus Quote of the Week goes to CCP Fozzie, who has released information about the changes to freighter and jump freighter stats. Those stats came with a quite dramatic reduction in base freighter and JF cargo capacity. Now, freighter capacity has always been a little bit absurd; it's pretty easy to get yourself into trouble, the amount you can fit into them. On the other hand, jump freighters have always been the one and only viable way to get large amounts of cargo into null-sec. And the smaller your null-sec alliance is, the more that you have to rely on them.

After all, as much as EVE devs sometimes pine for the bad old days of freighter escort ops, ain't nobody want to do that in today's EVE of the ever-present hot drop or black ops drop. The game that made those ops viable is long, long gone. These days, any freighter escort op of more than one jump would be a more than adequate target for a large super-cap hot-drop.

So the nerf was quite a shocker and it didn't take very long at all for people to figure out that with this dramatic reduction in jump freighter cargo capacity, the only real viable rigging choice was going to be cargo rigs of either the T1 or T2 variety. And to match current JF capacity, you'd need the T2s. These go for about 725 million a pop and are based on a pretty thin supply line dependent on a single type of salvage, Single-crystal Superalloy I-beams. Needless to say, the market for this material has gone a little nuts (I cheerfully admit I invested in it myself, once the changes were completely public): 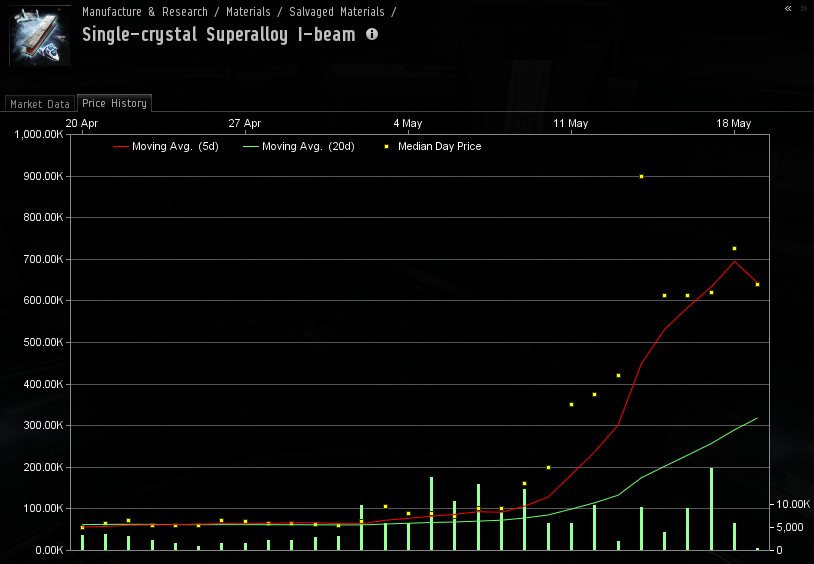 Prices of this type of salvage have increased by a factor of more than ten and volumes have gone completely insane, thousands of them changing hands per day where a few hundred were more typical before. Using today's blueprints, each JF will consume about 260 units of this material, which means there are about 40 JFs worth on the Jita market just now. Spending the coin will result in between a 1% and a 4% increase in JF capacity according to this excellent spreadsheet I spotted on Reddit. The alternative is to go with T1 rigs which will result in a 4.5% to 7% loss in capacity, along with a very small reduction in tank and a 20% increase in align time.

The net result: rigs on JFs means that both align time and cargo capacity have been nerfed, and rigs will fix one or the other. If you, Solomon-like, try to use one rig for each you end up with about a 25% reduction in cargo and a 10% increase in align time. Not exactly a good compromise. So JF pilots are left with one choice: fit the cargo rigs and eat the align nerf and slight tank nerf.

To all of this, Fozzie said the following:


...yes, the fact that this is a small reduction in Jump Freighter power is completely intended.

OK, then! Been taking lessons from CCP Greyscale, have we? ;-) Fozzie's usually much more nuanced than this. This was demonstrated after the thread ballooned to a few dozen pages in 12 hours, and he added:


I'm seeing some good feedback about the unique role of Jump Freighters meaning that they don't get much benefit from rigs other than cargo rigs, and this is indeed a problem that limits player choice. I'm going to bring up a few ways to help solve that issue with the other designers early next week.

The response to this much more Fozzie-like addition was wags who instantly started clamoring for rigs that reduce fuel consumption or increase jump range, if CCP wanted to give them choices. ;-)

Anyway, to me the interesting bit to all of this is how it pretty much drives right into the meta-arguments about EVE class warfare and large null-sec blocs. First, we have jump fuel consumption for all jump-capable ships being greatly increased, then we have jump freighter capacity being nerfed. Therefore, those hiding behind every bush who see large null-sec blocs benefiting from these changes unfortunately have had a pretty lovely piece of evidence thrown at your feet. After all, big alliances are likely going to shrug, buy their logistics chain pilots the T2 rigs, and come out of this change with 4% increased capacity for those logistics chains. Then they'll shrug again and buy them the larger piles of isotopes needed with their rental income.

Meanwhile, small alliances and solo players will be stuck with either a cargo reduction or a 1.45 billion ISK bill. And they'll have to pay it while also being hit in the wallet with those very same isotope costs. Likely, they'll grumble and go T1. Which means that big alliances are seeing a buff, and only small alliances are seeing a nerf. Oh, and no points for guessing that the prices of topes are also going up... 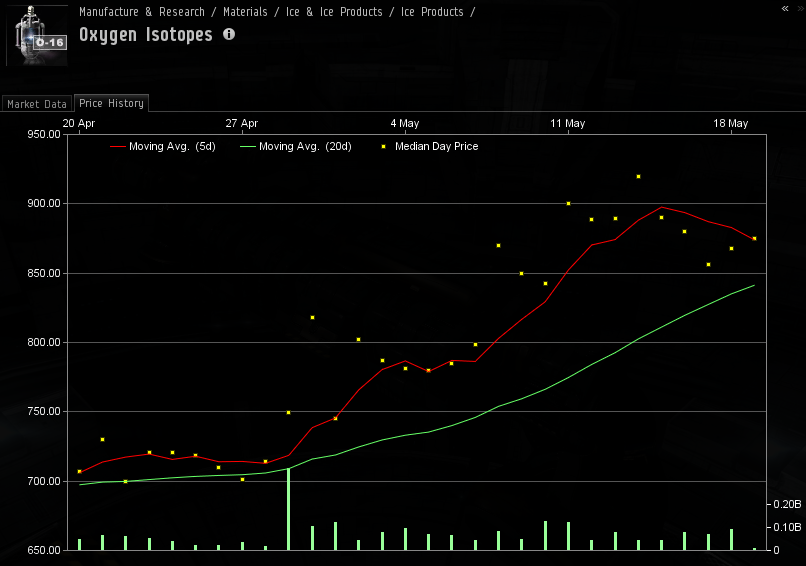 EVE players bought a billion units of the four types of fuel the day Fozzie announced those changes. With a B. With another 300 million units or so selling per day since then. So if you haven't already stockpiled your strategic reserve for the future at the lower isotope costs, I'm afraid it's three weeks too late.

Now, in all fairness, CSM8 discussed the concept of freighter and JF rigs with CCP before our term ended and we were enthusiastic about the idea of customizable freighters and JFs. The idea of having players choose between a freighter with a large cargo hold, a freighter that aligned much quicker than average, or a freighter that might actually be able to tank some damage during ganks was highly appealing. But that was the concept, not the numbers. I'll be interested to see what CSM9 members say about their impressions of the numbers.

mynnna and Sugar Kyle have already weighed in. Their differing perspectives are enlightening to say the least and I encourage you to read them. About CSM8, I often said that members had different opinions and if those opinions disagreed strongly, sometimes we would argue them in front of the devs, who found such back-and-forth valuable. It's clear as crystal that something like that happened with this change. For those curious, my opinion aligns more or less with Sugar's.

Finally, all of this caused a wag on Reddit to joke...


If the measure of how well you're doing at EVE Online is the number of tears you can harvest in a given unit of time, then CCP Fozzie can now quit EVE. He's won. Game over, the highest score has been achieved.

And that brings me to the funniest bit of this of all. This mini-threadnaught is all about what is -- at the end of the day -- a 4.5% cargo capacity nerf and six additional seconds to align. It certainly drives home how much all of us value our :numbers:, don't you think?
Posted by Jester at 11:31 PM