I'm gonna keep this one fairly short because it's been going around the gaming press news lately and a lot of you probably already know about it. But as always when I report news, I'll cover briefly what's going on, then give you my take on it.

The Elder Scrolls is currently in the midst of what I would regard as its third major issue since its launch a month or so ago: it has a very serious and growing bot problem. 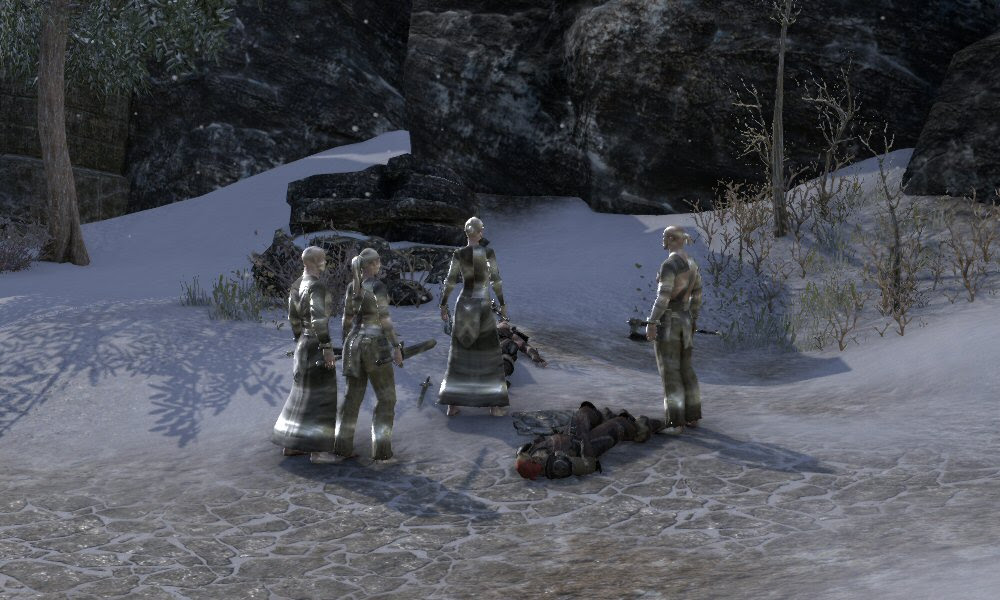 Now all MMOs have bots. And I should preface my discussion of ESO bots by saying that I've never played a single minute of World of Warcraft, nor have I even been in a room with a computer where it was running. But it's obvious now even to me that the tools that make botting in WoW possible have been modified for ESO. Botting has gone from a gold-farming business to being available to casual ESO players. You can't go ten minutes in the game without seeing a little cluster of between four and eight clients "following the leader" through dungeons and open areas. They rapidly sweep through normally-difficult areas wiping out everything that spawns in seconds. Then clusters of them gather around dungeon bosses and crush them repeatedly, usually destroying the boss before actual players can even get in more than a swing or two.

I mentioned a few weeks ago that the corpses of some dungeon bosses were in little piles five or six high. Last weekend, I encountered one particular boss with a very high spawn rate whose corpses quite literally covered the floor of the entire room he spawned in eight or more deep. Meanwhile the fifteen or so bots killing him weren't even waiting for him to spawn: they were just repeatedly launching attacks on his spawn point until he appeared.

So yeah, I'd say there's a pretty major problem.

The prevalence of randomly-named bot characters, though, has changed to the use of more casual botting software which apparently allows a single player to carry along three or four more or less identically dressed and equipped "retainer bot" alts who provide mass DPS while the main handles trickier situations, healing, and crowd control. I'm sure some players are only doing this so they can compete. But that certainly doesn't make it right! And it's creating an escalating problem.

GMs occasionally get into the game's version of local and inform players of their intent to kill the infestation and there's been a couple of times now when I've been in a dungeon trying to get at a boss to find a cluster of "players" disappear from the area in quick succession. So the devs are trying to do what they can. But it's clear that they're going to have an issue for a while until some kind of automated tools can take over for what is pretty obviously an overworked and over-extended team of GMs who instead of dealing with player issues are dealing with hundreds or thousands of bots.

For myself, I've been moving my play time of the game later at night where the problem isn't so prevalent. And I'm confident that the issue is eventually going to be dealt with. But in the meantime, this is pretty frustrating...
Posted by Jester at 5:22 PM