Ready for some Friday evening philosophy? I'm going to throw a really nasty one at you. Even our old friend Dinsdale might have to sit down and think about how he responds to it.

The New Player Experience panel at Fanfest this year was presented by CCP Rise, who did a great job with the material. If you haven't yet checked out the Youtube video of his pitch, I recommend you do so. The whole presentation is worth watching but I'm going to focus on one particular element.


NPE in EVE -- and specifically, getting and keeping new players in EVE -- faces a lot of challenges, none greater than EVE's famed learning cliff. However, Rise points out that from CCP's perspective, the game's very tutorial may also be part of the problem! While going into this, he presents a remarkable statistic. "We have a lot of data on this," he says then adds, "I've obscured it so I don't get in trouble." But the "obscured" data is frightening enough (it's about 17 minutes into the video): 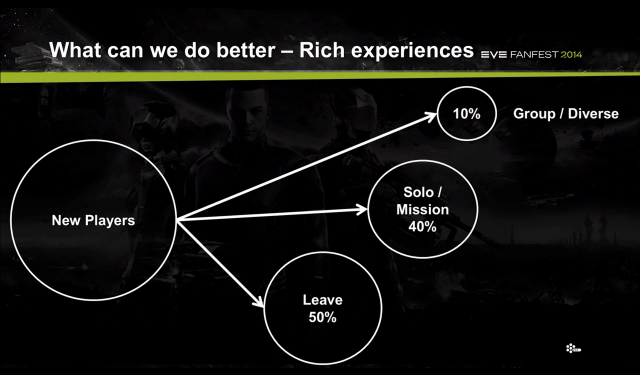 What Rise presents with this slide is that when new players pay for -- not try out, pay for! -- EVE, 50% of them leave the game very shortly after doing so (he implies their subscriptions last for one month). 40% of them move into solo activities, which he primarily describes as missioning. And in his words only "five to ten percent" join a group had have a diverse experience with the game. Of the middle group, Rise says this:


They don't trade very much... they don't engage in a diverse range of activities... they're leveling up their Raven, basically.

He then implies that CCP doesn't get to keep this group of customers for very long either. "For many of them, this is not a good fit and they end up leaving," he says. The final small group are the ones that tend to interact with other players: "They're trading with other players a lot, they're in corps more often, they're talking in fleet chat more often, they're on PvP kills more often. These people tend to stick with us."

Put another way, between 80 and 90 percent of all new EVE subscribers that stay with the game for more than a month (a) avoid playing the game with other EVE players; and (b) many will probably leave the game anyway.

I'll give you a second to digest that.

Now obviously, this is a problem that the devs have to address and Rise says straight off that the tutorial itself tends to guide new players into this behavior. They want to address the NPE such that it instead guides players toward "richer experiences"... code for multiplayer EVE.

Some of you out there might feel inclined to argue with him. Here's the philosophical bit (get ready to yell at me). CCP has never shown interest in competing in solo content-driven theme park MMOs. The fact that players drive content in EVE has always been the game's competitive advantage. But between 80 and 90 percent of new EVE subscribers are avoiding that game play. Meanwhile, the remaining 10 to 20 percent remain very loyal to the game and invested in player-driven content.

Therefore, if you were CCP with a limited budget to support development of EVE Online, where would you put your resources? If you think CCP should put more resources to this larger group of solo players, how do you think it would help?